WHO IS
MATTHEW CUTILLO ??

Fast forward to 1986: At 12 years of age starts playing bass in first cover band, seguing to acoustic/rhythm guitar and singing in bands into early twenties.

Early 2004 returned to the USA feeling the repercussions of 9/11 as prime motivator for returning to NY... stumbling upon online booking website GigMasters, quickly joined, figured out how to use the service and rose to be Quintuple Rising Star Award-Winner & in 2015 achieved GigMasters "500 Club" Founder status (500+ gigs & 650+ 5 star rave reviews online!)

#1 nationally on GigMasters of 100,000+ entertainers from 2008-2015 before moving on to using multiple booking websites including Gig Salad, The Knot & Wedding Wire and is currently a Preferred Vendor on all 4 sites. 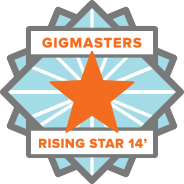